The past few weeks have peppered my conversations and my Facebook account with talk about the recent deaths of Michael Brown and Eric Garner. Their deaths, and countless other attacks on people of color in this country, are racist, violent acts. However, this violence and racism is not merely state-sanctioned. It is, in many cases, state-instigated. Racism and violence exist outside our political and legal systems, certainly, but those institutions give them teeth, give them power and credence. Ours is not a government that fails to protect its citizens; it is a government that protects itself by failing them.

Some cops’ reactions to Eric Garner’s death by illegal chokehold convince me that I’m not unreasonably paranoid. They tell me that their position justifies the assault of a civilian for the maintenance of institutional order. One anonymous poster wrote, “A more accurate headline would be ‘Non Compliant Fat Bastard Gets Just Due In Resisting Law Enforcement Officers.’ ” It’s good that this person wrote that because I had forgotten that unthinking compliance with authority was such a splendid thing. On a different but equally disturbing note, another poster wrote, “I think they were very generous, maybe too generous in the amount of time they allowed this guy to vent.” Yes, very generous. How magnanimous of them to allow a man to breathe momentarily before murdering him.

In a reading for one of my classes, a quote from political scholar Muthiah Alagappa jumped out at me: “The legitimation of power relies on the conviction of the governed that their government…is morally right and they are duty-bound to obey it. In the absence of such conviction there can only be relations of power, not of authority, and political legitimacy will be contested.” We are faced increasingly (or perhaps just more visibly), I think, with the exercise of power by a government with waning legitimacy.

I’m writing about this now because I don’t know what else to do. In a selfish way, I want to be able to say that I stood on the right side of this fight. In the absence of my conviction of my government’s morality—in the absence of Darren Wilson’s and of Daniel Pantaleo’s conviction, even indictment—I want to say that I saw what was happening and did not remain silent. I’m still searching for what I can do about it, but I’ve decided to say something. Because of the accident of my birth and privilege, I have not yet had to directly fight any of these battles, but I know that I must join the war.

The photos below show an art installation inscribed with Eric Garner’s last words. 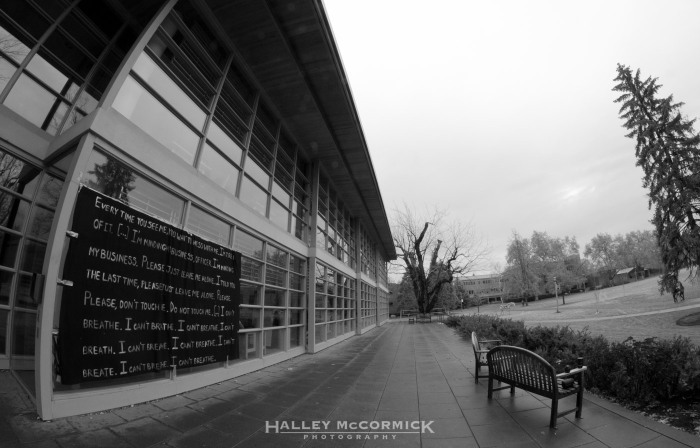 One thought on “In the Absence of Conviction”