The morning of Saturday, July 9, found four friends joining me for the three-hour drive to Spokane, Washington, so that we could attend a vigil prompted by the deaths of Alton Sterling and Philando Castile, black men killed by police during the past week. Once we arrived, we met up with another friend of ours to add our six voices to the hundreds there calling for justice for those wrongfully killed.

Hundreds of people gathered in front of the Spokane County courthouse, many holding signs. Phillip Tyler, president of the Spokane NAACP, spoke and acted as an emcee for the event. The vigil included speeches by activists and community leaders, and the event closed with a march to the Spokane Law Enforcement Memorial in recognition of the five Dallas police officers killed last week.

When the police reinforce and protect the actions of bad cops, they lose credibility and integrity, and they lose our trust. Until police can consistently build departments that foster relationships with their communities, until they train cops to react in the same way to white folks as they do to people of color, until they reward officers for de-escalatory actions and hold them accountable for violent ones—until then, the “not all cops” mantra will mean little.

I saw a quote make the rounds on Facebook today, posted in one instance by a friend who was with me at Saturday’s vigil. The quote from Adrienne Maree Brown reads, “Things are not getting worse; they are getting uncovered. We must hold each other tight and continue to pull back the veil.” As we commit ourselves to action, we also commit ourselves to compassion and empathy of the deepest kind, the kind that allows us to fight and question and listen and to risk comfort for justice. By demanding police reform, we grab onto a thread of the veil. If we pull hard enough, we won’t just pull back the veil; we’ll unravel it.

Hundreds of people gathered in front of the Spokane County courthouse on Saturday, July 9, to express anger and grief over the deaths of Philando Castile and Alton Sterling. 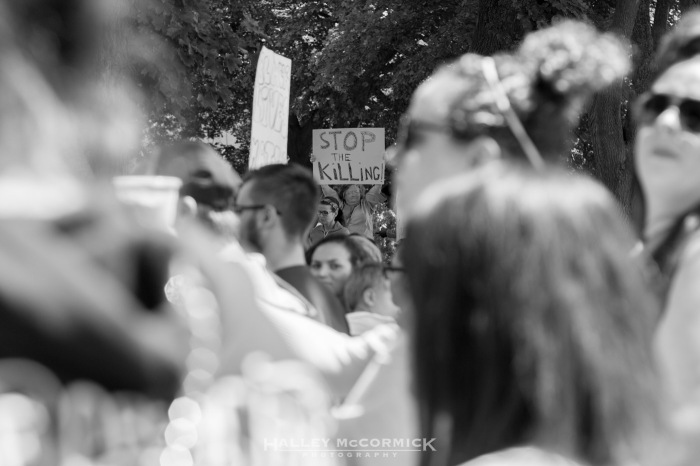 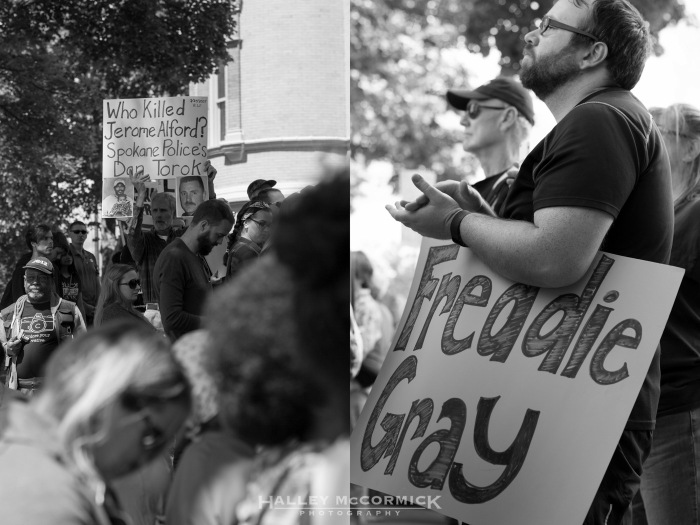 Left: A demonstrator holds a sign referencing the 2007 death of Jerome Alford, a homeless Spokane man, following a violent confrontation with Spokane police officer Dan Torok. The county prosecutor ruled the police shooting to be justifiable homicide. Right: Many people in attendance made signs that hearkened back to deaths of other people of color at the hands of police, such as Freddie Gray, who died while in police custody in Baltimore last year. 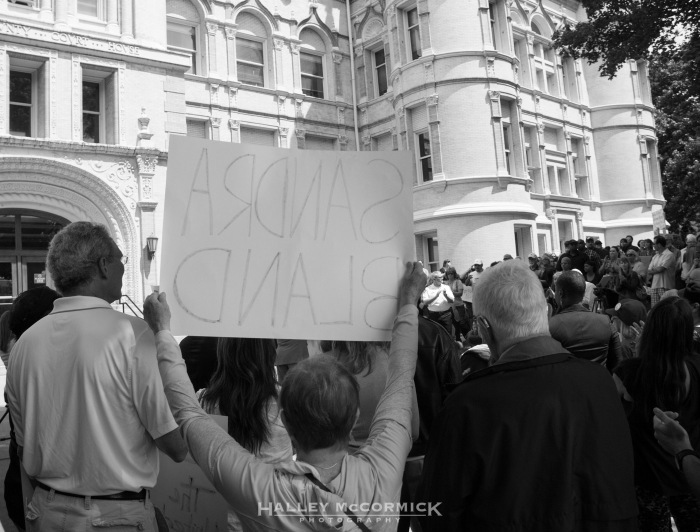 Kitara Johnson, a speaker and singer at Saturday’s vigil, hugs a counter-protester who tried to disrupt the event. 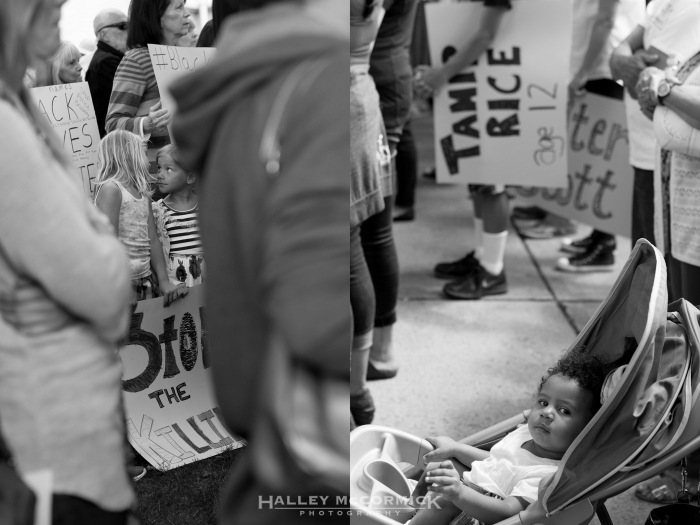 Kitara Johnson expressed her dedication to advocating for progress and unity: “I’m committed until we’re black and blue; I will fight.” Johnson culminated her speech by singing the gospel hymn “His Eye Is on the Sparrow.”

Sandy Williams, commissioner of the Washington State Commission on African American Affairs, noted that people’s racial identities are inextricably linked with their experiences and, in particular, their relationships with law enforcement. She said, “Despite all the people who are constantly telling me that they don’t see color, yes, you do. I see your color; you see my color. Because if you cannot see my color, you cannot see me. If you cannot hear my story, as uncomfortable as it is, you cannot know me. If you cannot stop defending your position and minimizing [mine] long enough to recognize the reality of my experiences—experiences that are different from yours—then you cannot be my brother and you cannot be my sister.”

Liz Moore, director of the Peace and Justice Action League of Spokane, addressed white allies specifically during her speech: “I want to ask my fellow white people, will we listen to people of color? Will we move ourselves out of our comfort zones to act against racism? Will we continue to educate ourselves? Will we commit to end white silence?” 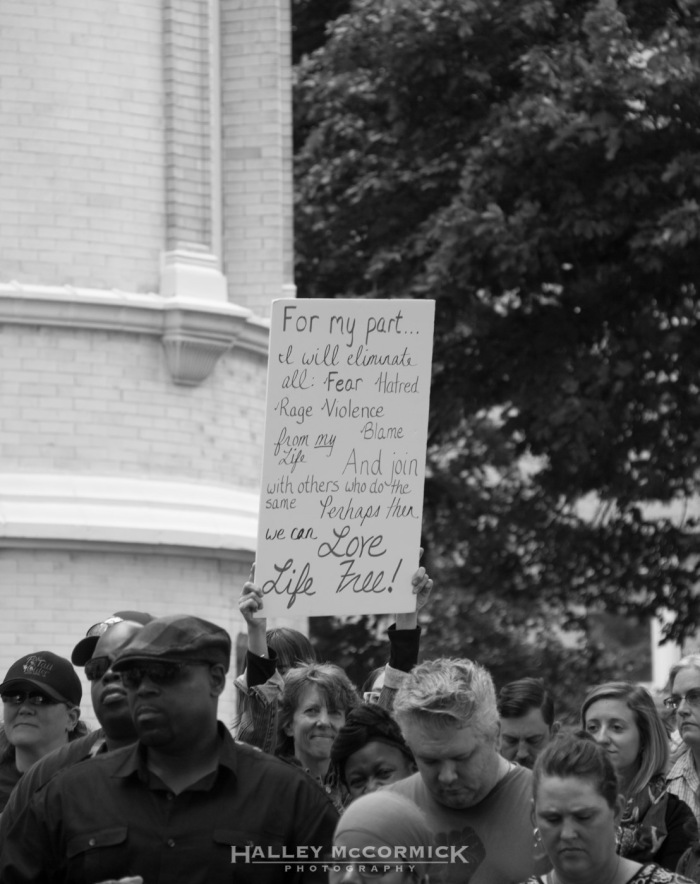 Demonstrators march from the front of the courthouse toward the Spokane Law Enforcement Memorial. 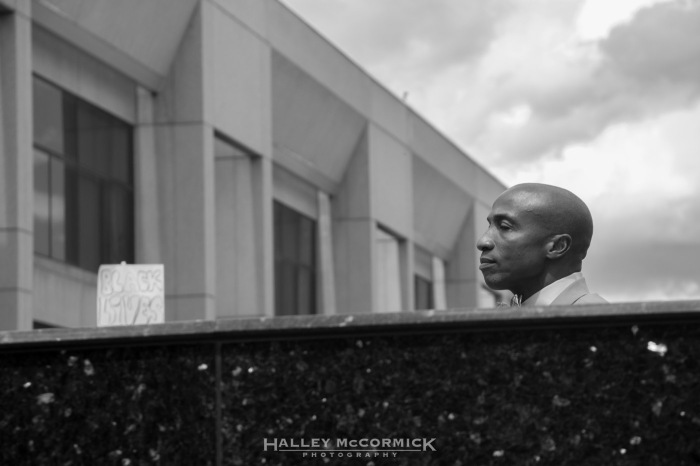 Phillip Tyler, President of the Spokane NAACP, addresses the crowd gathered at the law enforcement memorial. “In Dallas, those police officers lost their lives protecting the protesters’ right for freedom of assembly, for freedom of speech. That shouldn’t have happened.” 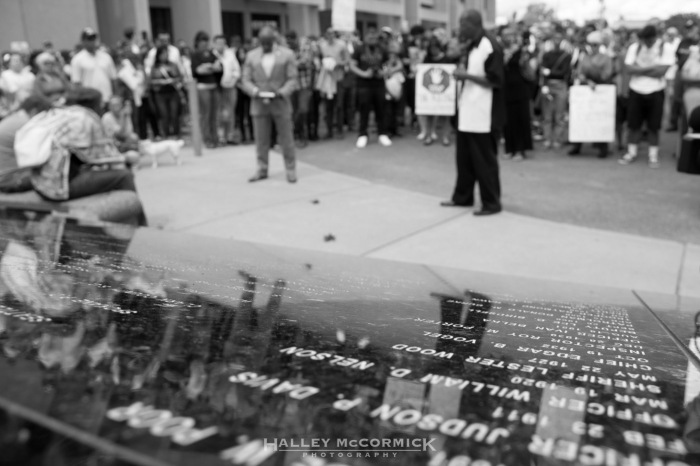 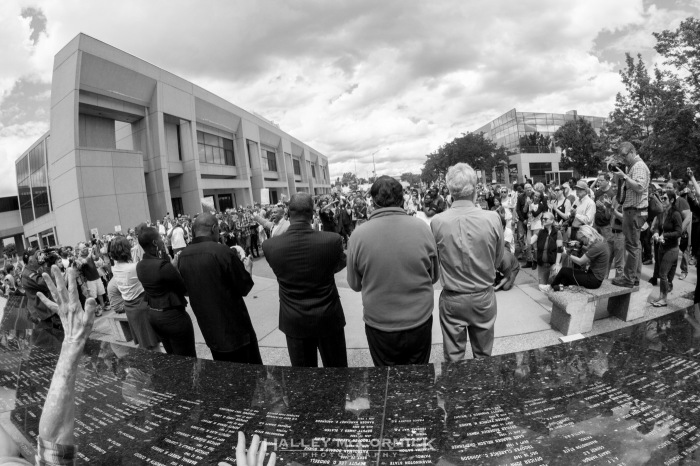 Phillip Tyler ended the vigil with a call for openness and discourse: “I’m extending my hands to all of those out there who would be on Facebook, who would be on social media, and somehow say that you can’t be in support of Black Lives Matter and Blue Lives Matter. I’m extending my hands to say, ‘Let’s be friends. Let’s talk about this. Let’s have public discourse.’ Because you can’t be friends with a clenched fist extended. You can only do it with an open hand.”

One thought on “Unraveling the Veil”