Last Monday, February 16, students and faculty at Whitman College gathered for a candlelight vigil to honor the victims of two recent shootings: one in Chapel Hill, North Carolina, where three Muslim students were murdered; and one in Pasco, Washington (only an hour’s drive from campus), where police killed a Mexican immigrant.

Both crimes received significant attention in conventional news outlets, but the very same outlets feed the fears that prompted these crimes in the first place. A short example: four days after the Chapel Hill murders, in an unrelated incident, Canadian police thwarted a mass shooting plot; our well-meaning liberal friends at NPR qualified their report of the event by assuring readers that the planned attack “was not related to Islamic terrorism.” This insidious association of Islam with violence—and of violence with Islam—hides the horror and absurdity of its claim behind assumed causality. It conditions us to place our trust in a police force that can protect us from terrorists. How can we see past a fabricated and expertly maintained veil?

What we witness differs from what the media tells us. When I watched the video of police shooting Antonio Zambrano-Montes in the streets of Pasco, I couldn’t understand what I was seeing. “Police brutality” and “police violence” seemed like mild labels for a murder at the hands of armed officers with state backing and virtual legal immunity. What trust can we place in this sort of police force, in a structure of authority which manufactures enemies in order to give the illusion of serving and protecting? How do we translate what we see in these shaky video frames into an explanation for why this atrocity occurred?

At the vigil, a professor culminated his speech by leading us in a verse of “Amazing Grace.”

Amazing grace! How sweet the sound
That saved a wretch like me.
I once was lost, but now am found,
Was blind, but now I see.

Although I’m a little wary of apparent ploys to fill me with the stirrings of inspiration, I appreciated the choice of hymn. All wretches ourselves, we congregated there, I think, to wrestle with a world that demands that we see it and understand it in order to change it. But maybe it is not grace that grants us the ability to see clearly; rather, perhaps it is clarity of sight that brings us a little closer to grace.

A student writes a message to the families of the victims of recent shootings in Chapel Hill, N.C., and in Pasco, Wash.

Faculty and students gather to hear speakers share their thoughts. 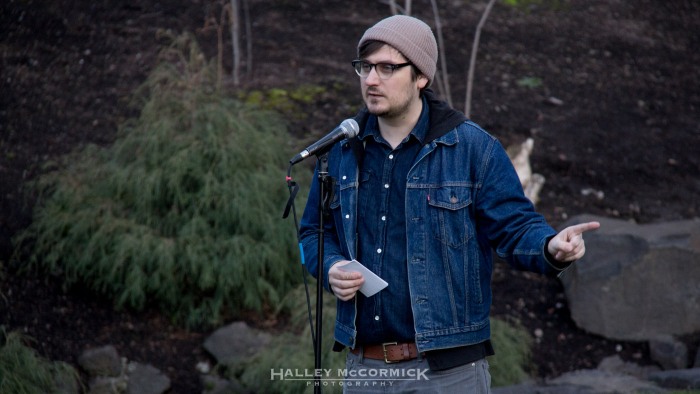 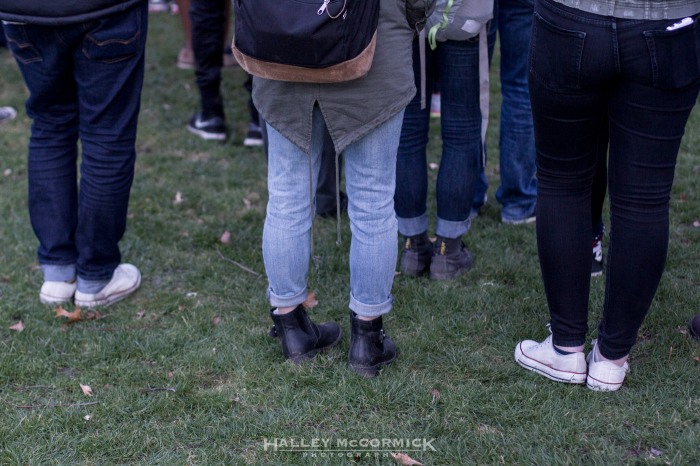 One thought on “Clarity of Sight”